Cozying Up to Chinese art

“We’re not at the heights of 2010 and 2011, but the market has definitely recovered its mojo,” said Henry Howard-Sneyd, Sotheby’s chairman of Asian art, who was the auctioneer in New York this month.  An 18th century Chinese teapot sold for $3.5 million, it was one of the star lots in Sotheby’s biannual ‘Asia Week’, the auctions raised $60.4 million. Thanks to the presence of two prestigious single-owner collections, the total proceeds from the series was 149 percent higher than the equivalent series last September.

Brexit, the impending U.S. presidential election and general macroeconomic jitters might have cooled demand for European and American art, but the market for historic Chinese artifacts seems to be warming up again – at least at auction.

“A sense of depth is back,” added Mr. Howard-Sneyd, commenting on the number of bidders from China, Hong Kong and Taiwan vying for the lots in New York. Sotheby’s said that collectors from Asia Purchased 58 percent of the lots and accounted for 75 percent of the value of the sales. In the case of the 18th century famille-rose “Hui Mountain Retreat” teapot, more than half a dozen bidders competed before it was bought by an Asian collector.

BP protesters put on a show at museum 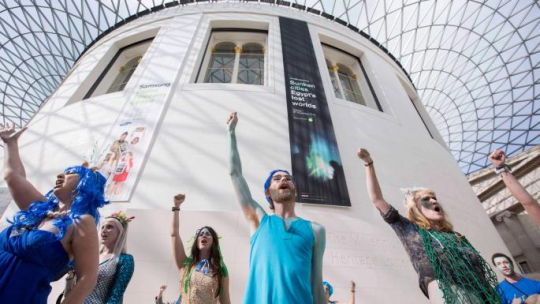 An ocean-themed group organised by more than 100 artists — dressed as sea creatures, mermaids and pirates — called for BP’s sponsorship deal to be dropped. They billed their performance, which included sea shanties, as a “theatrical battle between BP and the ocean”, at the venue in Bloomsbury, central London.

The protest was an attempt to persuade Hartwig Fischer, the museum’s new director, to reverse his decision to accept a five-year sponsorship agreement worth about £1.9 million a year from 2017. The museum currently receives about £2 million a year from BP under a five-year deal that began in 2012. The protesters said that they were highlighting the irony of the oil company sponsoring the Sunken Cities exhibition while contributing to climate change that most scientists believe will result in raised sea levels. The museum responded that it respected people’s right to protest but said that temporary exhibitions were only possible with funding from private sponsors.

Auctioneers are taking a keen interest in the fate of the $25 million art collection believed to have been amassed by Brad Pitt and Angelina Jolie. The actors, who announced their separation last week, have made no comment about how they will divide their assets, which include a private gallery of works at Château Miraval, their home in the south of France.

Pitt and Jolie own several works by Neo Rauch, the German artist, including Etappe, a depiction of a Formula One car in a pit stop. Pitt bought it at Art Basel in Switzerland in 2009. They also own ‘the Hope’ depicting a child with a spray-painted flower series, by a British street artist Dom Pattinson, which they received as a wedding gift in 2014. The couple have never made their purchases public but the collection is widely believed to contain works by Banksy bought for £1 million in 2007 in London.

A young artist from Hackney who spent a year working on a painting of Barack Obama today told how he was overwhelmed to receive a personal letter of thanks from the White House. Kevin Gill, 20, worked for up to 10 hours a day over 12 months to create the “billion-dollar bill” featuring the American president’s face.

Four months later, he received an official letter in the post from Mr. Obama thanking him for the “kind gift”. Mr. Gill, who has been inspired by the president’s battle to tackle gun crime in the US, said his “biggest goal” now was to meet him in person.

The artist said: “My main thoughts were that Obama had never been on a note before, and that there has never been a billion-dollar note, so I decided to merge the two to create some artwork. “When I received the reply I was overwhelmed, I was just so moved and shocked. I thought maybe he might reply after he stepped down because he would have more time but I never actually expected a reply. “The whole process took a year, I had to do sketches and planning and then actually paint it. It’s not an ordinary painting, it’s double-sided — so twice the work.