On this day, English painter and engraver, John Linnell, was born (16th June 1792) in Bloomsbury, London. During the course of his career he followed a naturalistic approach to painting and was a long-time rival of the English Romantic painter John Constable. In particular, he was interested in Northern European art of the Renaissance and was an admirer of the works by the German artist Albrecht Dürer. He was also the friend and patron of the English poet and artist William Blake, whom he introduced to the group of young English artists known as The Ancients and gave two largest commissions a single series of designs.

From a very early age, Linnell was exposed to the world of art. His father was a carver and gilder, which probably helped cement his son’s interest in art. For instance, Linnell was surrounded by artists and was already selling portraits drawn with chalk and pencil at the age of 10. He was under the tutelage of the Anglo-American history painter Benjamin West and was also in residence at the house of the English watercolour painter John Varley. There, he met contemporaries such as the English painter William Hunt and the Irish painter William Mulready.

In 1805 he was admitted to the Royal Academy where he excelled in drawing, modelling, and sculpture, for which he received medals. After training as an engraver, he executed a transcript of ‘Burial of Saul’ by the English painter John Varley, published outlines from Michelangelo’s frescoes in the Sistine Chapel, in the Vatican, Rome, and oversaw the issue of plates from the pictures in Buckingham Palace. Mainly, he supported himself financially by executing and selling miniature paintings or larger portraits. It was only later on, in 1846, that Linnell gave up portraiture for good and moved to Redhill where he devoted his time to painting the pastoral sceneries of Surrey. 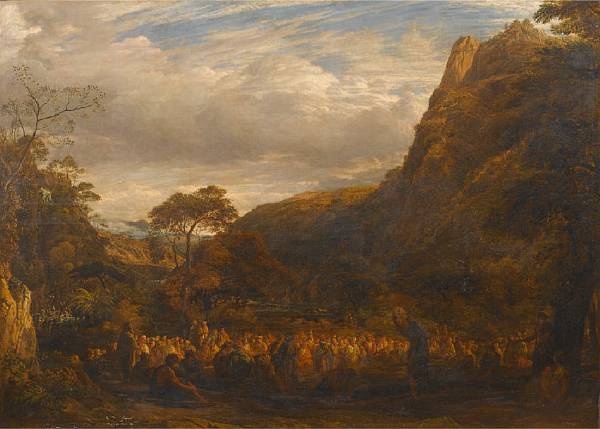 He soon started to be recognized for his landscape paintings, for which he is mostly known for today. These were often executed in an idyllic manner during the beginning or the end of the day. Importantly, they were embedded with a poetic feeling and were rich in colour, qualities that were pleasing to the eye and were therefore well sought after. As a result, Linnell became a wealthy man. Yet, despite his professional success, he was continually denied membership of the Royal Academy due to his difficult relationships with his peers. While his landscape paintings reflected nature at its best, they were not devoid of religious subjects who took on the titles of his works. Examples include ‘Saint John Preaching’, ‘Covenant of Abraham’, and ‘Journey to Emmaus’.

In terms of selling his works, these fetched high prices, which is how he was able to purchase his house in Redhill where he remained until the day of his death on 20th January 1882. Towards his final years he never abandoned painting, even though he was physically inapt to do so. Noteworthy landscape paintings, other than those he made while living in Surrey, were of the North Downs and the Kentish Weald. During his free time, aside from painting, he also studied the Bible and published critical pamphlets revolving around Christian themes.